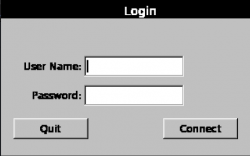 While FLTK offered a lot of benefits, including a Linux-based GUI layout tool, the DOS port also had a lot of issues.

First off, performance wasn't great. FLTK was really not designed to work on such a memory bandwidth starved environment like a typical retro DOS computer. Moving windows was painful. Redraws were tedious. Still, these issues could likely be overcome.

Next I had to do serious work on the "window manager" that allowed multiple windows to be displayed on the screen. Hotspots for mouse events didn't line up with where FLTK thought they were. Window stacking and z-order was basically unaccounted for. As long as only one window was on the screen at a time, things were fine. But who wants that?

The last straw was the fonts. I spent a lot of time on the fonts, figuring they were the "low hanging fruit" of the problems to be fixed. How wrong I was! After months of continuing to build the client under FLTK and dealing with all the issues, I finally decided it was time to find another solution.