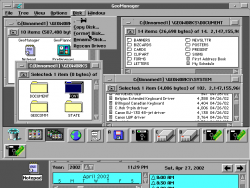 Remember GEOS? A lot of people don't realize it was also released for the PC back in the DOS days. It seriously deserved to compete with Windows 3.x. It was fast, light, ran on far more systems than Windows could, and was generally just a great experience.

Of course, Microsoft couldn't have that. Which is why it's all but forgotten on the PC.

But there's an effort underway to open source the entire thing, polish it up, and get it shipped again!

With a rich widget set, quick startup and shutdown, and a complete SDK, I figured, "why not?" Strip GEOS down to just what was needed to run the client and build on top of it.

For awhile, it worked great! However, GEOS is a 16 bit application. For users, this is a non-issue. But for developers, it's a headache. It also limited what programming libraries could be used since almost all "modern" libraries that have been ported to DOS are 32 bit.

Still, I gave it a good go and highly recommend GEOS as an alternative to Windows 3.x. I'll be using it again in the future for sure!